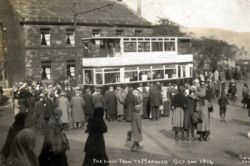 Huddersfield Corporation opened its first steam tram route in 1883. By 1899 the route had reached as far as Slaithwwaite but never got to Marsden.

In 1901 electric trams began to replace steam trams but it was not until 1914 that the first tram reached Marsden. Trams on the Bradley-Marsden through service were painted Post Office red and cream and were fully upholstered and equipped with air brakes.

One unusual feature of Huddersfield Corporation trams was that they carried post boxes. In the 1920s Huddersfield trams carried more mail than those of the rest of the country put together.

Just before the Second World War Huddersfield's trams began to be phased out and replaced with trolley buses which continued to be used until the early 1960s when they were replaced by double-decker motor buses.